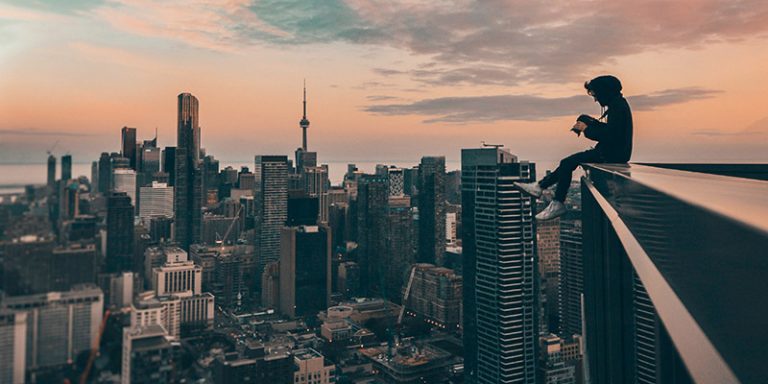 It was my third time riding the tram up to the J. Paul Getty Museum that overlooks the vast Los Angeles landscape. The rolling hills of the vineyard in the distance and the smoggy downtown skyline were warm reminders that I was visiting my favorite museum in all of Southern California. I stepped off the tram and ascended the Getty Center steps, only to be blinded by the clean white marble that surrounded me. In my eyes, the breathtaking architecture at the museum with its curving contours and monumental size is second only to the central garden that lies to the right of the West Pavilion.

While I did take this opportunity to revisit the perfectly manicured garden and Leonardo Da Vinci Art of Sculpture Exhibit, what caught my attention this time around was the photography display on the bottom floor of the West Pavilion. Entitled Urban Panoramas: Opie, Liao, Kim, the exhibition showcased three artists who delved into the urban landscapes of Los Angeles, New York and Reykjavík, Iceland.

Catherine Opie presented black and white panoramic shots of the expansive mini-malls that first appeared in the Los Angeles area which she claims we are so accustomed to “whiz[zing] past.” Some are littered with chain restaurants, others with laundromats and restaurants that bear signs in foreign languages. Overall, her photographic exploration displays the way in which mini-malls are symbolic of the struggle between assimilation and identity maintenance so many immigrants in America still face today.

Jeff Chien-Hsing Liao captured the “river” of cultural landscapes in the seven mile span of the New York Subway. He entitles his work Habitat 7, which is comprised of seven color photographs of each stop between Flusing, Queens and Times Square. While each frame appears to be a single moment in time, each one is really a composite of about 12-15 shots Liao digitally streamlined into a single photograph. This allows for a strong variation in lighting and positioning that as he says, “cannot happen naturally.”

Soo Kim photographed an entirely different landscape an ocean away in Reykjavík, Iceland. Her work showcases the highest form of craftsmanship in which she took two photographs and cut out each of their volumes. This gave her work a unique depth and dimensionality that revealed bushes and ocean water filling in the negative space of the empty buildings. Her shots were taken during the summer solstice at midnight from an aerial view which explains the lack of people and variations in lighting. Thus, her audience feels as though they are at many places at once, when in reality they are viewing the same comprehensive, dizzying landscape.

As a California website design firm, Urban Geko is constantly refreshing it design knowledge by staying up-to-date with trends across all platforms of the industry. This includes: modern art, photography, motion graphics, popular culture among various other categories. By doing so we equip ourselves with the expertise we need to deliver to you the high quality design you deserve from your Los Angeles website design firm.

How to Master the Art of SEO, Vol. 1: Keywords