Apple is a multinational American company founded by Steve Jobs on April 1, 1976, which designs and markets electronic products. As the name apple suggests in English “apple”, the logo represents a bitten apple.

Why an apple? There are several theories as to the choice of fruit:

Apple’s very first logo depicts the famous mathematician Isaac Newton leaning against an apple tree. The latter would have had a revelation about universal gravitation when an apple fell on his head. This logo was designed by Ronald Wayne.

The first Apple logo was created in 1976 by Ronald Wayne and already showed an apple, ready to fall on an Isaac Newton more concentrated than ever. But this is only the beginning of the history of the Apple logo, the most powerful brand in the world (source: Inter brand ranking, October 2018). Are you ready to experience the evolution of one of the simplest yet famous logos on the planet? 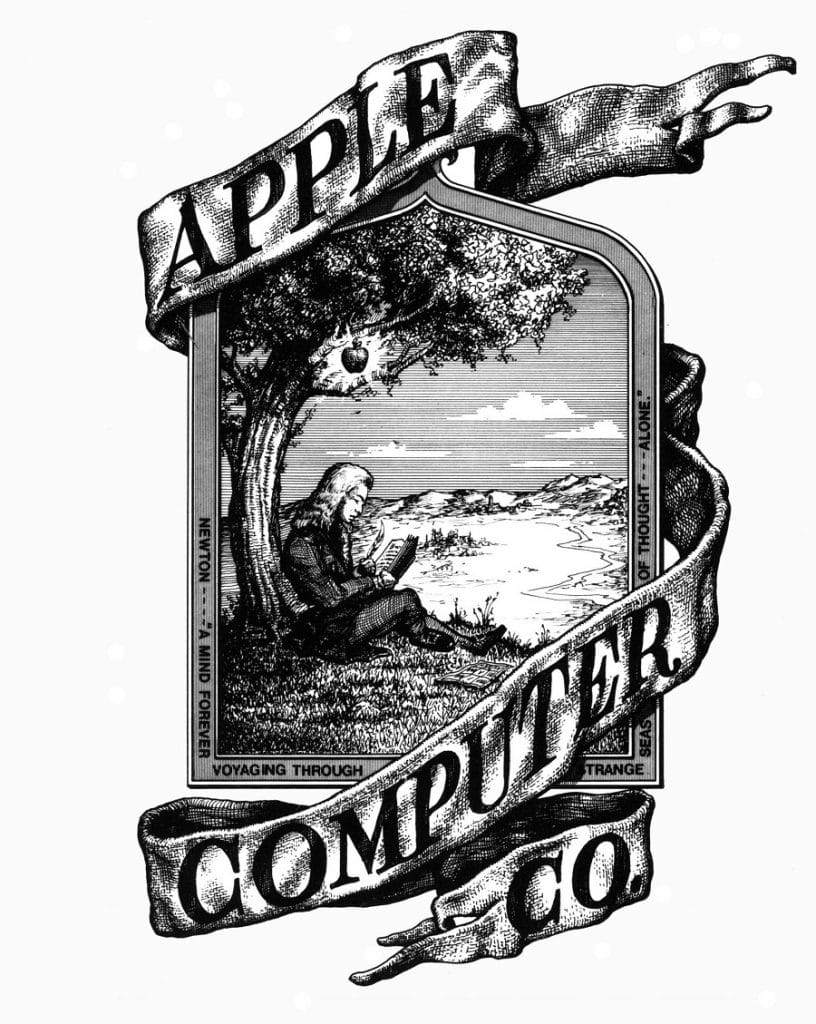 The first Apple logo was designed in 1976 by Ronald Wayne (sometimes considered the 3rd founder of the brand).

This logo represented the famous scientist Isaac Newton, sitting under a tree on which an apple reeled dangerously, just above his head.

The frame featured an excerpt from an English poem written by William Wordsworth: “Newton… A Mind Forever Voyaging Through Strange Seas of Thought… Alone.” (“Newton… A mind traveling through the meanders of thought… Alone”).

The choice of Apple as a brand name is a result of both Steve Jobs’ taste for apples and the fact that it allowed it to come before the Atari brand in the phone book. These are two rather original explanations for creating a logo!

The Isaac Newton logo only lasted for a year. In 1977, Steve Jobs decided to modernize it and called on the graphic designer Rob Janoff.

The result is one of the most famous logos today: the famous “Apple” bite. According to Janoff, it was a way not to confuse an apple with a tomato, but it also allowed for a pun between byte (computer unit) and bite (bite in English).

Janoff had also made monochromatic proposals to Steve Jobs but the latter preferred the rainbow version, according to him a means of conveying a more human and warmer image of the company while differentiating himself from the more serious logos of IBM or HP. The colors of the logos obviously have a meaning; Steve Jobs has chosen the card of originality with this multicolored version.

Janoff didn’t mind, he simply placed the green on top to favor the reference to nature on the small leaf of the apple.

The rainbow logo was used for 22 years, until Steve Jobs returned to Apple, who decided to end it a few months later.

A complete turnaround has taken place: goodbye rainbow colours make way for a monochrome logo! It is first blue for a year, and then turns black.

This choice is justified by a change in positioning, the brand wants to prove its seriousness (it is no longer a start-up!) And, like luxury brands, plays the card of sobriety.

When Steve Jobs came back in 1997, Apple was losing a lot of money, which led to a new strategy regarding the use of their logo.

The idea is simple: the larger the logo on the products, the more visible it is! The goal was to make an impression with a more original product than those offered by the competition.

This plan which may seem little researched, even childish, was nevertheless followed for the iMac Bondi Blue with a logo placed prominently on the top of the screen … and even today, the Apple logo is still placed in the most places.

From 1998 to 2000, the Apple logo continued its modernization momentum, still adopting monochrome but with material and volume effects.

The brand made a final change in 2014, deliberately choosing to assert itself as an icon, with a minimalist, clean and silver-gray logo that reflects its products.

In October 2018, Apple struck a blow by offering its logos in several hundred unique versions on the invitation cards of its traditional multi-year conferences. A very successful media stunt that will have caused a lot of talk!

There you go, you know all about the history of the Apple logo, but there are plenty of other anecdotes behind our favorite logos.

If the rainbow logo with its vintage aspect will remain the favorite logo of aficionados, the monochrome logo allowed Steve Jobs to establish his legitimacy and offered him greater flexibility for the launch of new products, by being clearly easier to adapt.

Apple’s transformation from a start-up to a hi-tech giant involved defining a high-end positioning, the emphasis on innovation and the implementation of a solid marketing strategy.

The best web design tips for your blog